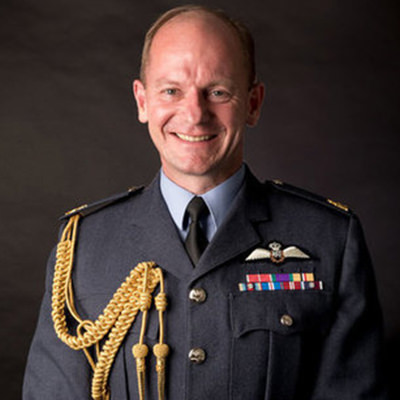 Air Chief Marshal Mike Wigston was appointed Chief of the Air Staff on 26 July 2019. Staff appointments in the Ministry of Defence have included the Operations Directorate and the predecessor to what is now Military Strategic Effects.
Time:
Time:
Event Type:
Location:

Commissioned on a University Cadetship in 1986, he completed his pilot training on the Tornado GR1 in 1992 followed by a succession of frontline tours, including operational deployments enforcing the no-fly zones in Iraq. He commanded 12(Bomber) Squadron, flying the Tornado GR4 and leading the Squadron on two operational tours in Iraq and large force exercises in Canada, Malaysia and the USA.

Appointments in operational headquarters have included Al Udeid Airbase, Qatar, as the Chief of Combat Operations in the Combined Air and Space Operations Centre; Basrah International Airport, Iraq as Commander 903 Expeditionary Air Wing; and one year in Afghanistan as the Director Air Operations in Headquarters ISAF Joint Command. He was appointed CBE in 2013 for his contribution to that mission.

Staff appointments in the Ministry of Defence have included the Operations Directorate and the predecessor to what is now Military Strategic Effects. In 2013, after a short spell as the Tornado Force Commander, he became the Principal Staff Officer to the Chief of Defence Staff. In January 2015, he was appointed Administrator of the Sovereign Base Areas of Akrotiri and Dhekelia and Commander British Forces Cyprus, responsible for the civil governance of the Sovereign Base Areas and command of British forces based permanently in Cyprus.