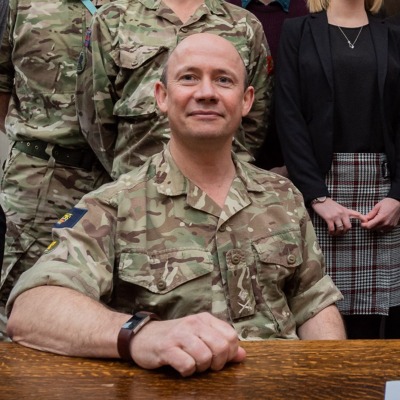 Major General David Southall graduated from Imperial College in 1989, commissioning into the Sappers in 1990. As a subaltern he completed Northern Ireland, Bosnia and Middle East tours as well as a fun 4-month sojourn in Zimbabwe as an Op Raleigh project manager. He was an ARTD Chief of Staff before Shrivenham staff training. At sub-unit command, he supported 19 Brigade on Op TELIC II in Iraq, and subsequently in Kenya, before converting his Field Squadron from mechanised to light role.

A 9-month stint in Kabul with NATO's ISAF IX was followed by command of 33  Engineer Regiment (EOD) with two further tours back in Afghanistan; as PJHQ’s SO1 Counter-IED Implementation and CO of the Op HERRICK 12 Counter-IED Task Force. After a year on the HCSC Directing Staff, Major General Southall returned to NATO as ACOS G5 Plans in the HQ Allied Rapid Reaction Corps.  He commanded the RSME Group in ARTD, running the Army’s largest Public Private Partnership.  More recently he was the Chief of Staff Home Command and Standing Joint Command (UK) delivering recruiting, training and UK based operations across the Army's firm base. He currently serves as Director of Basing and Infrastructure in Army Headquarters.

Major General Southall was awarded MBE and OBE on the 2007 and 2011 Operational Honours lists, the Ehrenkreuz der Bundeswehr in Gold in 2016 and CBE on the 2019 New Year’s Honours List.  He serves as a Royal Engineers Colonel Commandant and is Patron to the National mental health charity, 'Sapper Support'.