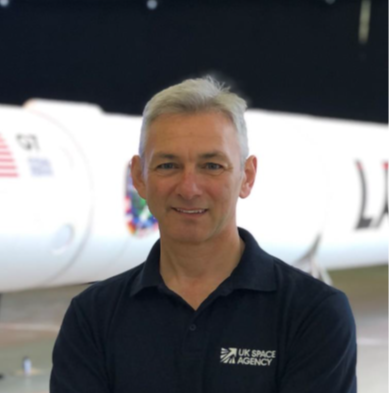 The Role of Civil Space in Delivering the National Space Strategy

Ian joined the UK Space Agency in January 2020 as Deputy CEO for Programme Delivery, responsible for overseeing major National space programmes including Spaceflight, Regulatory Control and the UK Space Based PNT Programme. He is also the Agency’s head of profession for programme and project delivery personnel and is a member of the UK Space Agency Steering Board.

Prior to this he was Assistant Chief of Staff for Information Warfare and Chief Information Officer for the Royal Navy, where he was responsible for information, intelligence and communication capabilities, including satellite communications, networks, electronic warfare and cyber. He was SRO for 3 major programmes and commissioned the Royal Navy’s first digital and data lab, delivering an Artificial Intelligence, machine learning and big data capability into the Service using Agile methodology.

His previous appointments include Joint Forces Command, where he was the Programme Director for Skynet 6, the Ministry of Defence Central Staff and the British Defence Staff in Washington, DC. He has served in six warships as a Weapon Engineer, including the previous strike carrier and Fleet Flagship, HMS ILLUSTRIOUS.

Ian has BEng in Electrical and Electronic Engineering and a MSc in Guided Weapon Systems. He is a Fellow of the Institution of Engineering and Technology, an MPLA Alumnus of the Said Business School, Oxford and a member of the Royal College of Defence Studies.